15 Septembers of Souls and Data

For 15 Septembers I have felt the angst in the days leading up to 9/11 and on the day, to wake up with tears that made the first steps out of bed difficult. I’ve been so fortunate to be allowed to spend each 9/11 at Squad 1 and get to know the firefighters and their families (today we talked about ink and gushed over each other’s tats); to be able to hear Metrotech’s announcements for when the Towers fell; to be at the Mass around the corner from the firehouse.

I’ve also seen the faces of spouses, siblings, relatives and parents of the departed grow weary and weathered with grief that I suspect will never go away. No one who lost someone can ever forget.

Last year, the Washington Post published a somewhat objective assessment on how many Americans actually remember 9/11.With each passing year, more Americans are born whose only understanding of the terrorist attacks will come via stories handed down by older friends and family, or taught in a social studies class (and this teaching comes before revisionist educators choose to change the details to be more inclusive of terrorists groups).

WaPo’s analysis showed that on 9/11/2015, 25.8% of the country was six years of age and younger (8%), or not yet born (17.8%). With approximately 4 million people being born each year and approximately 2.6 million dying each year, the percentage of people being born after 9/11 will rise every year, memories of others will change or fade, and the life stories of specific people will likely be blended together into an amorphous mass that is transformed into “an event in United States history.”

Just like the day the Japanese attacked Pearl Harbor on December 9, 1941, “a day which will live in infamy.” Except that only 6.2% of Americans still have a personal recollection of the event. Most Americans don’t know who uttered those infamous seven words. That 2,402 people were killed in the attacks. Or that one day later, the United States formerly entered World War II.

2,996 people were murdered on 9/11. Here in New York City, of the 2,753 people killed that day, only 1,638 people have been forensically identified. Do and math and ponder the significance of someone you love dying and literally disappearing forever.

According to the CDC and OSHA, as of July 2016, 1,064 rescue and recovery workers have died from diseases directly attributed the attack; there will be more. Even after the dust settled, 9/11 continued to be a witch’s brew of death. Compared to pre 9/11 data, FDNY cancer rates are 19% to 30% percent higher for firefighters who worked on the pile.

But remembering 9/11 is more than just big data; it’s about the people whose stories might never be truly known when the events of the day are distilled into history lessons… 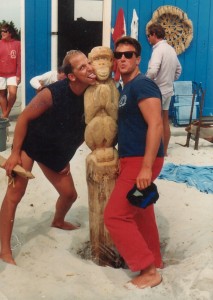 9/11 was also Dave’s 8th wedding anniversary (I’ll do some math – today would have been his and Marian’s 23rd anniversary); they were to have celebrated their anniversary at the Central Park Boathouse and at the Whitney Museum. Some time around 9AM, he called his wife as he was finishing his 24 at Squad 1 and told her, “I’ll meet you in 10 minutes.” Then Hell on Earth began. Dave and his other Squad brothers were partially through the Brooklyn Battery Tunnel when traffic snarled; they ran the rest of the way to the Towers (that’s 60 pounds of gear).

Dave’s last known location was on the 45th Floor. His memorial service was held on October 17, 2001 – without a body. His body was found on December 8, 2001. There was another and far more private funeral shortly thereafter. 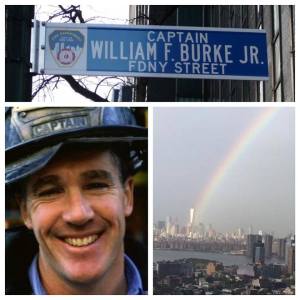 Billy, the Captain of 21 Engine, was in the North Tower with his crew as the South Tower fell. His crew kept calling, “We got to get out, Cap.” His answer?

Billy disappeared to search another floor, while his crew made it out before the North Tower also collapsed. His body has never been found. How can I help? By giving up your life and saving the lives of others.

Ashes to ashes, dust to dust.

While history lessons about 9/11 will eventually be written with the insensitivity of numbers, 9/11 is really a lesson about souls lost and lives sent in unexpected directions. Whose stories will you tell? Will you know how Dave and Billy truly lived? How about my fellow Jones Beach lifeguards Christian Maltby and Tom Palazzo who worked at Cantor Fitzgerald? Will you care that they walked this planet and touched so many?

15 Septembers later and it still feels like a deep paper cut to the soul. But at least I’m here; I still have time to think and act in ways that would make Dave, Billy, Chris, and Tommy proud. So ask me about them, and I’ll sit with you for as long as wish.

I want to tell you their stories so 9/11 becomes an historical event about the lives and souls of remarkable people and not one of distilled data.

2 comments on “15 Septembers of Souls and Data”